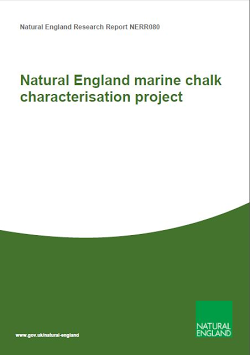 Chalk is a sedimentary rock largely composed of the skeletons of calcareous nanoplankton, deposited between approximately 100 and 65 million years ago during the Late Cretaceous period. Chalk can be heterogenous, with local conditions and the proportion of clay present at time of deposition responsible for the diversity. The softness and friable nature of chalk results in the presence of unique species and communities not present on harder rocks. Chalk is a finite resource, and as such, any damage to the physical structure of chalk is permanent.
Marine chalk specifically is a scarce resource worldwide, with England holding a globally significant proportion of marine chalk habitats. This gives England an internationally significant responsibility to conserve its marine chalk habitats. Marine chalk is protected within various pieces of legislation in England, which has resulted in to the designation of a number of Marine Protected Areas (MPAs) with marine chalk as a feature.
Despite its importance, little is known about the diversity of marine chalk habitats, and whether all the chalk with the MPA network is comparable. In order to ensure the MPA network provides robust protection of chalk habitats, the diversity of the marine chalk habitats must be recognised and maintained. Natural England (NE) therefore completed a review of the chalk within the English inshore MPA network to understand the importance of each MPA designated for chalk in protecting the full range of diverse habitats and associated communities that marine chalk supports. A workshop was organised for NE staff with a breadth of relevant specialist knowledge. The aim of the workshop was to agree a set of criteria for characterising marine chalk, in order to be able to effectively describe the diversity of marine chalk habitats within and between sites. The differences between sites were considered, and the factors which influence these differences explored. Workshop participants agreed to a final list of seven criteria for characterising marine chalk habitats in England; depth and zonation, lithological composition, hydrodynamic regime, structural complexity extent and distribution, geographic context and community composition. This final list is in no particular order and should not be considered as a hierarchy.
The diversity of marine chalk in the English inshore MPA network can be clearly demonstrated using the chalk characterisation criteria. There is a wide range in diversity for almost all of the criteria; chalk from two different sites are not necessarily comparable, with each site adding something unique to the network. There can also be a significant range in chalk characteristics within a site. Being able to characterise the chalk in MPAs is important for understanding the diversity of chalk habitats which the MPA network is protecting. This characterisation demonstrates that the marine chalk habitats in each MPA are important for different reasons, and MPA management should seek to maintain this diversity. Anthropogenic impacts could lead to changes in marine chalk which cause a shift from one marine chalk habitat to another, while ostensibly maintaining the feature which the site is designated for. Without an understanding of how comparable sites are, or how scarce each characteristic of chalk is, then the wider significance of such changes may not be fully appreciated.
If the physical structure of chalk is altered, it will not recover, and potentially rare elements of the habitats may be completely lost from the marine chalk network. The scarcity of marine chalk habitats combined with the relatively high potential for permanent loss of habitats warrants precautionary management across the marine chalk network to prevent permanent losses. This report can be used alongside Natural England’s statutory conservation advice by anyone wishing to undertake potentially damaging activates in sites designated for chalk in order to consider the full impacts and potential irreversibility of the activity, the level of precaution appropriate in the assessment and any targeted mitigation measures. The application of the characterisation criteria is currently limited by a paucity of data, in particular for some of the more recently designated sites and for particular criteria. Any conclusions drawn based on these datasets should be informed by an awareness of the resolution and confidence of the background data. Care needs to be taken to ensure that those areas that have not been surveyed, are not assumed to have no ecological value.