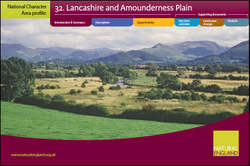 The Lancashire and Amounderness Plain is an area of high-grade agricultural land, bounded by Morecambe Bay in the north and Liverpool in the south. The eastern boundary is contained by the Bowland Fringe. The plain is made up of a series of low-lying landscape types: in the east, undulating lowland farmland on the highly productive coastal plain, and in the west, the former mosslands and their remnant sites, and the coastal marshes and dunes.
The northern Fylde (or Amounderness) coastal plain contains the estuary and lower reaches of the River Wyre, as well as its tributaries, the rivers Calder and Brock. It is predominantly improved pasture, with isolated arable fields. It is an ordered landscape of medium-sized fields with field ponds, clipped hedgerows and drainage ditches. This is a medium- to large-scale landscape, where blocks of windsculpted mixed woodland punctuate the relatively flat to gently rolling plain.
South of the Ribble Estuary the plain has a different physiographical history to that to the north, and this is reflected in the land use of the area. It is predominantly highly productive arable land with large fields. Agricultural drainage systems, including steep-sided ditches with localised reedbeds and steep embankments, are a dominant feature, and are responsible for the area’s dramatic transformation from marshland to a rich and ordered landscape of rectilinear fields. This is mainly an area of open, high-quality farmland.
Further information