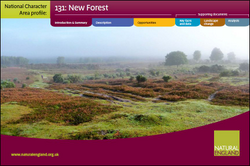 This National Character Area (NCA), 75 per cent of which is the New Forest National Park, also includes the lower Hampshire Avon Valley, defining its western boundary, and, to the east, the urbanised ‘Waterside’ from Totton to Fawley, with major oil-, energy- and port-related industry alongside Southampton Water. Physically it is a plateau, averaging around 80–100 m above sea level, of Palaeogenic deposits, which are exposed along the coast as internationally recognised fossil fauna, and overlain by Quaternary gravels in river terraces which retain evidence of prehistoric settlement. The gravels produce the acid soils which support the habitats and species designated under Natura 2000; it is one of the most important and extensive habitats of this type in lowland Europe. This has been retained, largely undisturbed by agriculture, because of its designation as a medieval royal hunting forest, the survival of grazing as part of a pastoral tradition, ancient Forest Law and more recent conservation policies. Along its Solent shore, the soft geology forms low cliffs and extensive marine deposition features – spits, salt marshes and mudflats – which are also designated under Natura 2000. The Avon Valley, also a Natura 2000 site, is distinctly different – a wide, flat valley bottom of mostly derelict watermeadows, and pasture and arable land, and a braided river, but linked with the Forest through grazing tradition.
Further information