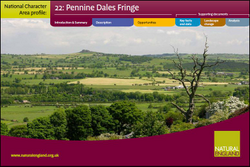 The Pennine Dales Fringe National Character Area (NCA) lies between the uplands of the Pennines to the west, and the Magnesian Limestone ridge and arable lowlands to the east. The land has a varied topography of exposed upland moorland fringes and plateaux dropping to lower foothills, separated by major river valleys and incised by numerous minor tributary valleys. It is underlain by Yoredale rocks in the north (limestone, sandstone and mudstone) and Millstone Grit in the south. It is a transitional landscape between upland and lowland. Drystone walls are common in the west while hedges, often thick and tall with frequent hedgerow trees, are more prevalent at lower elevations in the east. Broad valleys, widening to the east, with their more fertile soils support arable crops, while steeper, higher land in the west supports predominantly livestock farming.
Broadleaved woodlands (many of them of ancient origin), coniferous and mixed plantations, and numerous small woods and hedgerow trees all contribute to the well-wooded character of the area. Hamlets, villages and small market towns are particularly distinctive, with strong visual unity, being built in local Millstone Grit Group and Yoredale Group stone in the west and Magnesian Limestone in the east.
Further information