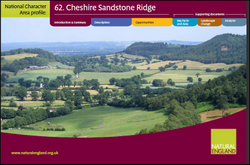 The Cheshire Sandstone Ridge National Character Area (NCA) is situated between Malpas and Frodsham and is surrounded on all sides by the Shropshire, Cheshire and Staffordshire Plain NCA, except to the north, where the ridge drops into the Mersey Valley NCA. It is a discontinuous ridge, but is very prominent, rising sharply from the gently rolling topography of the surrounding NCAs.
The topography provided by the reddish-pink Triassic sandstone ridge has been exploited for centuries, as evidenced by the remains of defensive fortifications and artefacts from the Bronze and Iron Ages, and the Saxon and Roman periods. The fortifications were linked by a track which now forms part of the Sandstone Trail along the ridge, offering expansive views to walkers. A number of communication masts are prominently located on the highest ground and are visible over a wide area, and a war memorial stands at the northern tip of the NCA, providing a distinctive local landmark.
Compared with the surrounding plain, the NCA has a strong mosaic of broadleaved mixed woodland comprising ancient woodland and some postmedieval conifer plantations, with large blocks of commercially managed conifers to the east. Remnants of a Royal Hunting Forest survive at Delamere and placenames such as Old Pale and New Pale indicate the
locations of medieval deer parks.
Further information