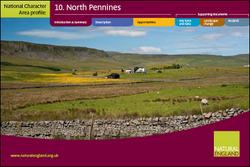 The North Pennines National Character Area (NCA), at the northern end of the Pennine ridge, has a distinct identity, with its remote upland moorlands divided by quiet dales. It is characterised by a sense of remoteness, with few settlements, slow change and cultural continuity. It comprises some of the highest and most exposed moorland summits in England, with several major rivers, including the South Tyne, Wear and Tees, draining out to the north,east and south-east. It is bordered to the west by the Eden valley, to the north by the Tyne valley, to the east by the Durham lowlands and to the south by the Yorkshire Dales. There are dramatic and panoramic views both across the moorlands and outwards, especially towards the west. The area’s natural beauty is reflected in the fact that 88 per cent of it has been designated as the North Pennines Area of Outstanding Natural Beauty (AONB).
Further information