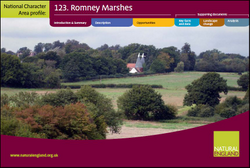 The Romney Marshes is an open landscape of reclaimed, low-lying marshland. The area is bounded to the south and east by the English Channel and to the north and west by the clearly recognisable ancient cliff-line, which now forms the backdrop to the marshes. It includes the vast sand and shingle beaches and flat marshland between Hythe in Kent and Pett in Sussex. This unique and sometimes forbidding area has a character all of its own and contains a wealth of wildlife and geomorphological features. Dungeness is an area of international importance for its geomorphology, plants, invertebrates and birds. Home to some of the UK’s rarest species it is designated as a National Nature Reserve, Special Area of Conservation, Special Protection Area and Site of Special Scientific Interest, as well as being a proposed Ramsar site. Dungeness and Rye Harbour comprise the largest cuspate shingle foreland in Europe, one of the few such large examples in the world.
Scattered settlements are linked by long, straight, open roads and have a distinctive architectural character, including weatherboarding and hung tiles; any have medieval churches at their core. The ancient towns of Rye and Winchelsea are popular tourist attractions, abound with heritage features. However, overall, urban areas account for a small proportion of this rural National Character Area (NCA). The transport links are sparse, and this, coupled with the nature of the landscape, rural isolation and lack of employment, means that the area suffers from issues of social and economic deprivation.
Further information