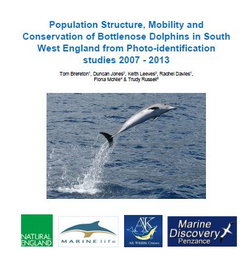 This report was commissioned by Natural England to get a better understanding of the inshore bottlenose dolphins Tursiops truncatus in the South West of England. The work undertaken by Marinelife, focussed on analysis of of a photo-identification database to gain an understanding of the population structure and abundance of bottlenose dolphins in the region. Three likely sub-populations were identified in (1) South West England – inshore Cornwall to Devon, (2) offshore English/French waters and (3) inshore France from Brittany to Normandy. Maximum abundance estimates for South West England ranged between 83 and 113 (range 87-142 95% CL)

The outputs of the study are considered by Natural England to represent the most up to date understanding of the distribution of common bottlenose dolphins off the South West of England. However it remains clear there are still significant gaps in our evidence and understanding of the patterns in behaviour of this species, particularly around differences in movement between offshore and inshore populations.