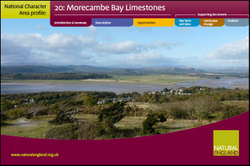 Morecambe Bay Limestones National Character Area (NCA) is a lowland landscape arcing round the head of Morecambe Bay consisting of conspicuous limestone hills with prominent scars, cliffs, screes and exposed limestone pavements separated by areas of low-lying undulating farmland.
The margins of Morecambe Bay have been formed by faulted outcrops of Lower Carboniferous Limestone, forming upstanding blocks and bare limestone scars, pavements and cliffs. Lower-lying undulating pastoral areas are found between the hills and the coast, including a larger-scale rolling landscape to the west and a smaller-scale landscape that contrasts with the surrounding limestone hills to the east. The character of the landscape is shaped by underlying geology, with areas of flat open grazing marsh framed by dramatic limestone outcrops, extensive salt marshes and sand flats re-profiled by the tides, and intimate mosaics of limestone woodland and limestone grasslands. The dynamic landscape of the coastal fringe is dominated by the intertidal foreshore with extensive areas of mudflat, sand flat and salt marsh backed by low limestone cliffs, pebble beaches or manmade defences.
Further information