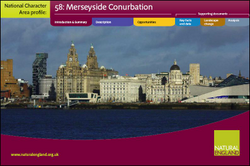 The Merseyside Conurbation National Character Area (NCA) is a predominantly urban and suburban landscape, based around the settlements of Liverpool, Birkenhead, Bootle, Kirkby, Maghull, Huyton, Bebington and Wallasey. The NCA sits on a low-lying but gently rolling platform punctuated by low sandstone ridges and bisected by the lower estuary of the River Mersey. There is a dense settlement pattern of housing and large-scale industry focusing on the city of Liverpool and Birkenhead/east Wirral, with their diverse historic and cultural centres. Many of the city edge settlements function as commuter settlements. There is a large proportion of industrial land use, with docks, warehouses and associated commercial land, interlinked by an extensive transport infrastructure.
Further information