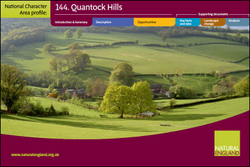 The Quantock Hills curve inland from the Bristol Channel and provide long, open views from their open moorland and heath-covered ridge. The Quantock Hills National Character Area (NCA) encompasses a variety of landscapes, including upland plateau, wooded valleys and rolling fields. Such differences in character are given further emphasis by their close juxtaposition within a comparatively small area. The landscape that is created is one of intimacy and diversity. Nearly all of the NCA (96 per cent) is within the Quantock Hills Area of Outstanding Natural Beauty. The area also contains the Exmoor and Quantock Oakwoods Special Area of Conservation and 30 per cent of the NCA is designated as a Site of Special Scientific Interest. At the heart of the Quantocks is the upland plateau, 381 m high. It is covered by heathland, creating the Quantocks’ best known landscape. This heathland is of great ecological value, being home to species such as the nightjar. The narrow plateau is cut by deep, woodland-filled combes which create a characteristic landform of repeating ridges and valleys.
Further information