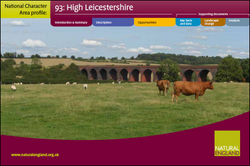 High Leicestershire National Character Area (NCA) rises out of the clay of the Leicestershire and Northamptonshire Vales on the western and southern sides and above the lowland plains of the Soar, Wreake and Welland valleys and the Vale of Belvoir. To the north and east the area abuts the Leicestershire and Nottinghamshire Wolds NCA, rising steeply out of the Wreake Valley, but with a more gradual transition towards the Vale of Catmose and Rutland Water towards the east over limestone lowlands. This landscape of broad, rolling ridges and secluded valleys has a quiet, remote and rural character with small villages and scattered farms. The predominantly rural character of the area comprises undulating fields with a mix of pasture on the higher, sloping land and arable farming on the lower, flatter land. Fields are divided by wellestablished hedgerows, with occasional mature hedgerow trees. A network of narrow country lanes, tracks and footpaths connect across the landscape interspersed by small thickets, copses and woodlands. Extensive views from the higher ground reveal a pattern of small attractive villages, hamlets and farm buildings set within an agricultural landscape, with traditional churches acting as distinctive features of the settlements.
Only a very small percentage of the NCA is classified as ‘urban’: the eastern edge of Leicester (including the suburbs of Thurmaston, Syston and Queniborough) and Uppingham, the only market town in the area, located close to the A47 which cuts horizontally across the middle of the NCA. The A6003 and B6047 provide the major north–south routes.
Further information