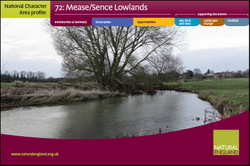 The Mease/Sence Lowlands are a gently rolling agricultural landscape centred around the rivers Mease, Sence and Anker. The area extends across: Derbyshire in the north, Warwickshire in the south, Leicestershire in the east and Staffordshire in the west. With its towns lying on the fringes of the National Character Area (NCA), only a very small percentage of it is urban. These lowlands retain a rural, remote character, with small villages, red brick farmsteads and occasional historic parkland and country houses. The National Forest extends into the area north of the River Mease.
The NCA contains one Special Area of Conservation (SAC) – the River Mease, which is also a Site of Special Scientific Interest (SSSI) – and has 139 ha of nationally designated SSSI, including the Ashby Canal SSSI. Important habitats include neutral grasslands, wet meadows, parkland, wet woodlands, rivers and streams, all of which support characteristic and rare species of international importance, including the white-clawed crayfish, the spined loach and the bullhead fish.
Further information