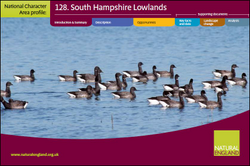 The South Hampshire Lowlands National Character Area (NCA) is a lowlying plain between the chalk hills of the Hampshire and South Downs and Southampton Water. Its highest point is an outlying chalk ridge – Portsdown Hill – but the bedrock geology is mostly open marine, estuarine and freshwater Tertiary deposits. The NCA is dominated by the city and port of Southampton and its adjoining towns and suburbs – 29 per cent of the area is urban. In the more rural areas, it is a mixture of farmland, particularly pasture, and woodland.
Some 18 per cent of the land cover of the NCA is woodland, of which almost half is designated ancient woodland, a legacy of the Forest of Bere, a Royal Hunting Forest that once covered the area. Today the most significant blocks of woodland are West Walk near Wickham, Botley Wood at Swanwick and Ampfield Wood near Romsey.
Although a high percentage of the area is urban, the NCA has considerable biodiversity interest. Southampton Water is internationally recognised for its importance for breeding and overwintering waterfowl and waders and for its wetland habitats such as mudflats and salt marshes. Three Natura 2000 designations cover parts of the area – Solent and Southampton Water Ramsar site, Solent and Southampton Water Special Protection Area and Solent Maritime Special Area of Conservation.
Further information