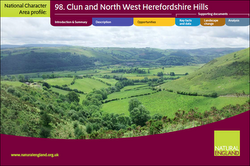 Clun and North West Herefordshire Hills National Character Area (NCA) is an undulating, tranquil, rural and sparsely populated area, divided by the river valleys of the Clun and Teme. The higher land is typically wind-swept heath and grassland bordered by areas of small-scale, irregular enclosure and slopes down to the Herefordshire Lowlands NCA to the south-east, typically with plantation and native woodland on the hill tops and upper valley slopes.
The heads of the valleys are narrow and deeply incised, with woodland on the steepest slopes. Downton Gorge National Nature Reserve is one of the most ecologically important of these valleys, and has also been designated a Special Area of Conservation (SAC). It is a ravine forest of small-leaved and large-leaved lime, together with ash and elm, and is considered to be one of the best examples of its type in the UK.
This area is of importance for its fast-flowing rivers. The River Teme is designated a Site of Special Scientific Interest (SSSI) for its important flora, fish and invertebrate fauna, including priority species such as twaite shad, sea lamprey, Atlantic salmon, otter and white-clawed freshwater crayfish. The River Clun SAC forms part of the River Teme SSSI and it is designated for freshwater pearl mussel – supporting one of the last populations in England and Wales. The River Lugg, designated an SSSI for its important flora and invertebrate fauna, notably its populations of white-clawed freshwater crayfish and otter, flows into the River Wye. Downstream the rivers widen to significant flood plains around the Teme and its tributaries, for example, the Wigmore basin.
Further information