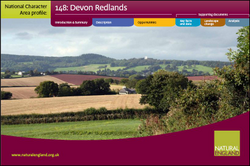 The Devon Redlands National Character Area (NCA) has a very strong, unified character. The underlying red sandstone and consequent red soil dominate the landscape through ploughed fields, cliffs and exposures, and are visually evident in the traditional stone and cob farmsteads, hamlets and villages that are scattered across the area. Not only does the soil visually characterise the area but its fertility also makes it the agricultural heart of Devon. Mixed agriculture has shaped this landscape since medieval times, an era that left a dense pattern of deep and narrow lanes imprinted in the landscape. The gently rolling hills that feature across the NCA support a network of hedgerows enclosing relatively small fields that are either grazed or under arable cultivation. Hedgerow trees and small copses often give a wooded appearance to the hills. The valleys in between are flat bottomed and open into extensive flood plains across the central part of the Redlands. Here, more ‘shrubby’ hedgerows or fences enclose larger arable or grazed fields.
Further information