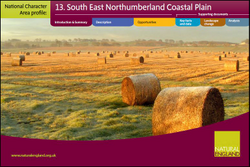 The South East Northumberland Coastal Plain is a flat, low-lying strip along the coast of the North Sea, extending from north Tyneside in the south to Amble and the Coquet Estuary in the north. It is largely urbanised in the south and more rural to the north, with large fields, restored and active open cast coal mines and a coast of rocky headlands and wide, sandy bays. Rural areas support mixed farming, with fields divided by low, often gappy hedgerows and few trees. The underlying geology has had a significant effect on the character of the area. Its accessible seams of coal which have been mined from the 13th century to the present day are of great economic importance to the area.
The coast supports a wide diversity of habitats including sand dunes, maritime cliffs and slopes, coastal and flood plain grazing marsh and mudflats. Parts of the coast are of European importance for the bird populations (roseate and Arctic tern, purple sandpiper and turnstone) at Druridge Bay and Coquet Island, which are included in the Northumbria Coast Special Protection Area, and for its dune systems and their plant communities, which are part of the North Northumberland Dunes Special Area of Conservation. The area supports a diverse range of marine species and ecosystems as a consequence of its geological diversity and the natural variation in the sediment loading of the water. The rivers Blyth, Wansbeck, Coquet, Pont and Seaton Burn drain through the coastal plain from the uplands to the west into the North Sea to the east, often passing through incised valleys with fragments of ancient woodland. They support rich wildlife, including white-clawed crayfish, otter, water vole and salmonids, and are important for recreation (walking, fishing and wildlife watching), water abstraction and sense of place.
Further information