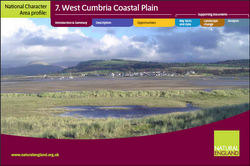 The West Cumbria Coastal Plain National Character Area (NCA) forms a plain of varying width between the Cumbrian High Fells NCA in the east and the Irish Sea to the west. Views inland are set against the Lake District mountains, with long-distance views to the Isle of Man and southern Scotland across the sea. The coastline encompasses a diverse range of habitats including mudflats,shingle and pebble beaches, honeycomb worm reefs, soft cliffs, the high sandstone cliffs of St Bees, dune systems, expansive estuarine systems and the barrier islands of Walney and Foulney.
Inland the wind-swept and open pastoral farmland of the undulating plain is dissected by more sheltered lowland river valleys. These valleys are delineated by woodland and grade into coastal landscapes as they approach the sea. The arable landscape of the St Bees area provides a contrast with the surrounding pastoral landscape. A large part of the area is designated as part of the Lake District National Park. To the north there are extensive areas of land reclaimed from coal mining, iron and steel industries, and processing industries around the towns/ports of Whitehaven, Workington and Maryport. The energy industry is highly visible and an important employer, with shipbuilding important around Barrow-in-Furness in the south.
Further information