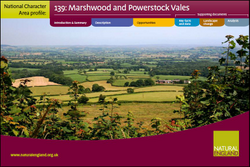 The Marshwood and Powerstock Vales National Character Area (NCA) sits within a horseshoe of high ground, overlooked by characteristic flat-topped Greensand hills to the west and north and by the mass of the Dorset Downs to the east.
The Marshwood Vale, characterised by regular hedged fields with an abundance of hedgerow oaks, is productive pastureland dotted with isolated farmsteads, some of pre-medieval origin. Across the River Brit, the Powerstock Vale lies on terraces of limestone, its combes incised by steep, wooded valleys.
The NCA’s entire 12 km of coast falls within the Jurassic Coast World Heritage Site and is traversed by the South West Coast Path National Trail, ascending Golden Cap, the highest point on the south coast of England, on its way. The coast is characterised by a series of large active landslips to the west, while to the east the famous cliffs at Burton Bradstock give way to Chesil Beach, starting its course to the Isle of Portland.
Bridport and Beaminster are the main towns. Elsewhere small villages, hamlets and dispersed farmsteads prevail.
Further information