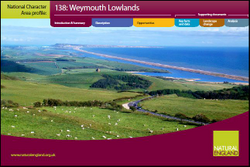 Weymouth Lowlands National Character Area (NCA) is defined by its complex geology of a broad ridge-and-valley pattern of chalk, limestone and clay and associated landform, a dynamic coast and its cultural heritage. The 68-kilometre stretch of coast is part of the Dorset and East Devon Coast World Heritage Site; it is known as the Jurassic Coast and is designated as a Heritage Coast, reflecting its internationally important geology, beauty and access opportunities. The South West Coast Path traverses the whole stretch while from the Isle of Portland eastwards the path is covered by the new rights afforded by the England Coast Path. Sixty per cent of the NCA lies within the Dorset Area of Outstanding Natural Beauty (AONB). The underlying limestone geology, which extends into neighbouring Dorset Downs and Cranborne Chase NCA, is part of an important aquifer complex supplying water to Weymouth, Dorchester and beyond.
Sweeping coastal views from windswept ridges and cliffs at the coast are dominated by the Isle of Portland, linked to the mainland by the 28 kilometres of Chesil Beach, a natural barrier beach and tombolo. Chesil Beach and The Fleet lagoon which it encloses are designated as a Special Area of Conservation (SAC), Special Protection Area and Ramsar site for their outstanding biodiversity interest, including their overwintering bird assemblage, and geomorphological and geological features. The Isle of Portland to Studland Cliffs SAC designated for coastal habitats including limestone grasslands) and Crookhill Brick Pit SAC (designated for its great crested newts) are also within the NCA. Agriculture is generally mixed, mainly arable, cattle and sheep. The landscape is largely treeless with pockets of woodland in the Bride Valley to the west and Osmington to the east.
Further information