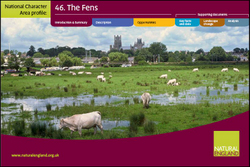 The Fens National Character Area (NCA) is a distinctive, historic and human-influenced wetland landscape lying to the west of the Wash estuary, which formerly constituted the largest wetland area in England. The area is notable for its large-scale, flat, open landscape with extensive vistas to level horizons. The level, open topography shapes the impression of huge skies which convey a strong sense of place, tranquillity and inspiration.
It is a large, low-lying, flat landscape with many drainage ditches, dykes and rivers that slowly drain towards the Wash, England’s largest tidal estuary. The single obvious factor uniting the Fens is the low-lying, level terrain reflecting its geological past. With the exception of the Isle of Ely, which reaches above 20 m, elevations rarely pass the 10 m contour, and typically vary by little more than one or two metres over long distances. Much of the land is below sea level, relying on pumped drainage and the control of sluices at high and low tides to maintain its agricultural viability. The level horizons and the huge scale of the landscape create a strong sense of isolation and tranquillity, and a distinctive sense of place. There are, typically, large open panoramas and enormous skies, whose changing weather patterns have a strong influence on the observer. Four major rivers drain into the Wash: the Witham, Welland, Nene and Great Ouse. All rivers now have artificial canalised courses that run straight for long distances and are bounded by high banks to contain the watercourse from the lower adjacent fields.
Further information