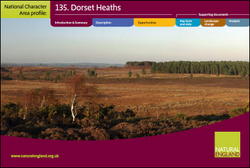 Dorset Heaths National Character Area contains part of the larger Dorset Area of Outstanding Natural Beauty as well as a major conurbation – the second largest in south- west England – consisting of the contiguous settlements of Poole, Bournemouth and Christchurch. Historically the area was dominated by extensive blocks of heathland (the Egdon Heath of Thomas Hardy’s novels) separated by river valleys and also by the two natural harbours of Poole and Christchurch.
This landscape, which pollen evidence suggests was established by the Bronze Age, saw rapid evolution in the last three centuries. The conurbation grew out of very small settlements. Improved technologies allowed first agriculture then conifer forestry to become significant land uses, more recently joined by open cast mineral working and military training.
Today the area contains some of the best lowland heath left in England, much of it managed as nature reserves by a variety of organisations and designated as a Special Protection Area (SPA), Special Area of Conservation and Ramsar site. Specialised species include Dartford warbler, nightjar, woodlark, sand lizard, smooth snake, ladybird spider, Purbeck mason wasp, southern damselfly, marsh gentian and Dorset heath. The larger tracts, along with the often adjacent conifer plantations, can still provide a real sense of wilderness and tranquillity, despite the close proximity of a major conurbation. In recent decades substantial work has been undertaken to both improve the condition of the habitat on these sites and to extend some of them back onto former heathland sites that had temporarily seen other uses. This work continues with the objective of physically connecting some of the bigger heathland blocks.
Further information