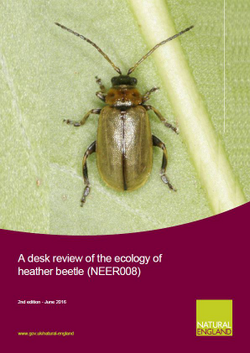 The heather beetle Lochmaea suturalis is a naturally occurring species in the heather dominated landscapes of the United Kingdom. When the heather beetle population density increases dramatically it can cause significant damage to heather plants. It has been suggested that burning heather outside the permitted heather-burning season will promote the regeneration of heather following heather beetle damage. There is also some discussion as to whether burning outside the permitted season might also help control heather beetle. For these reasons Natural England regularly receives applications for licences to burn outside the permitted season. However, burning at this time of year may have effects on a wide range of biodiversity. Therefore, Natural England commissioned this report, and NEER009 to ensure the best available evidence is being used when considering applications.