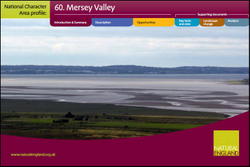 The Mersey Valley National Character Area (NCA) consists of a wide, low-lying river valley landscape focusing on the River Mersey, its estuary, associated tributaries and waterways. It is a varied landscape that extends from the mosslands near the Manchester Conurbation NCA in the east, to the Merseyside Conurbation NCA and the wide estuary with intertidal mudflats/sand flats and salt marsh in the west. The River Mersey is tidal from Howley Weir in Warrington.
The area encompasses a complex mix of extensive industrial development and urban areas, with high-quality farmland in between. Farmland in the north of the Mersey Valley NCA is predominantly arable, while in the south there is a mix of arable and pasture. Field pattern is regular and large scale, often defined by degraded hedgerows with isolated hedgerow trees. In the east, open, flat farmland is found on the rich, dark peaty soils of the former mosses, with a complex network of drainage ditches.
Urban and industrial developments line the banks of the River Mersey. Industrial infrastructure is often prominent, with large-scale, highly visible development including chemical works and oil refineries. The Manchester Ship Canal links the estuary to the heart of Manchester, perpetuating the industrial development of the area. There is a dense communication network of major roads, railways, canals and transmission lines. The urban and suburban areas provide housing for those working in neighbouring conurbations, as well as in the industries of the Mersey Valley.
Further information