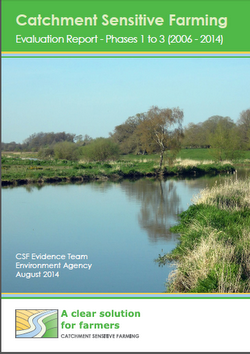 Evaluation is a core part of the Catchment Sensitive Farming (CSF) project: essential for assessing delivery of objectives and the project outcomes. This report covers the project’s work since inception in 2006 and demonstrates the considerable impact of voluntary work with farmers to reduce diffuse pollution.

All the activities in the Phase 3 reports are framed around a 4-stage process to inform farmers of local water quality issues and help farmers take action to accrue both environmental and business benefits. The 4 stages are:
• farmer engagement
• increased awareness
• taking action
• improvements in water quality

This approach has been tightly targeted to WFD Protected Areas and water-dependent SSSIs which are failing water quality objectives.

The Environment Agency-led evaluation of the project from April 2006 to March 2014 shows:
• Widespread uptake of advice and a dedicated capital grant scheme have brought about significant improvements to soil and land management practices. 167,788 individual mitigation measures have been advised to farmers on 16,133 farm holdings and 62% of measures recommended through 1:1 advice have been implemented.
• Capital Grants: from 1st April 2011 to 31st March 2014, the scheme contributed to approximately £71.6m of improvements. These grants have been matched with a similar amount of funding from the local farmers and land managers involved; demonstrating their impressive commitment and representing a total investment of up to £143.2m into the environment, farm infrastructure and local businesses across the catchments. In 2011, £1.2m of the grants paid were funded under the Water Frame Work Directive (WFD).
• Between September 2011 and March 2014, the 9 CSF Catchment Partnerships (led by local partners) provided advice on reducing diffuse water pollution to a total of 2,197 farmers in 10 catchments, through 846 farm advice visits and 95 training events which were attended by 1,290 farmers.