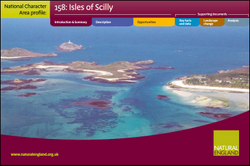 The Isles of Scilly comprise over 200 granite islands scattered across 200 km2, set out in the Atlantic some 45 km south-west of Land’s End. Of these islands only five are currently inhabited, namely the islands of St Mary’s, St Agnes, St Martin’s, Tresco and Bryher. The occupied islands cover a total area of just over 14 km2.
Only around 50 of the islands have some form of plant life, often just a few tufts of grass and wind-swept sea pink and lichens. The great majority are low outcrops of granite, sometimes barely breaking the surface at high tide. The islands contain 26 Sites of Special Scientific Interest and one Special Area of Conservation (SAC), designated for a range of geological and biological features, including maritime heathland and grassland, as well as one Special Protection Area and Ramsar site, highlighting the important seabird colonies of puffins, Manx shearwater and terns. The marine environment between and around the islands is designated as an SAC and a Marine Conservation Zone for the wealth of marine species it supports, from diverse rocky reef to grey seals that breed around the islands.
Further information