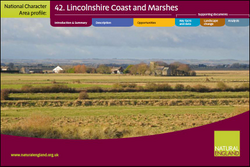 This area is characterised by a wide coastal plain which extends from Barton-upon-Humber in the north, across to Grimsby at the mouth of the Humber and south to Skegness. The area is bounded by the North Sea along its eastern edge and by the Lincolnshire Wolds to the west. The wide coastal plain incorporates three distinctively different but closely interconnected areas which run broadly parallel with the edge of the Wolds. To the west is the Middle Marsh which comprises a softly undulating arable landscape with a greater number of woodlands and hedgerows than other areas. To the east lies the Outmarsh, an open landscape of arable land, mixed with rich pasture divided by narrow dykes. The Outmarsh has changed in character – and was once as grassy as Romney Marsh or the Somerset Levels. It has gradually turned into an area which is predominately arable, particularly since effective pump drainage was introduced in the 2nd half of the 20th century, following the 1953 floods.
Further information