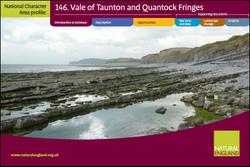 The Vale of Taunton and Quantock Fringes National Character Area (NCA) lies between the Brendon Hills on the edge of Exmoor to the west and the Somerset Levels and Moors to the east. It overlooks the Bristol Channel to the north and the Blackdown Hills Area of Outstanding Natural Beauty (AONB) to the south, and encircles the Quantock Hills AONB. The steep, moorland-topped character of the Quantock Hills and the Brendon Hills and the open character of the clay levels contrast with this area’s lush pastoral character. Panoramic views are gained from these hills across the vale to the coast and are an ecological link between these two areas of moorland. Within the overall character there is considerable variety, united by its lowland mixed farming landscape, with dense hedges, sparse woodland, red soils and settlement pattern.
The area is densely settled with a largely dispersed pattern of hamlets and scattered farmsteads linked by sunken winding lanes. The exceptions are the towns of Taunton, Wellington, Minehead, Williton and Watchet. Taunton and Wellington lie along the M5 corridor; these towns are undergoing considerable expansion and development owing to this main transport route, with associated development along the M5 itself.
Further information