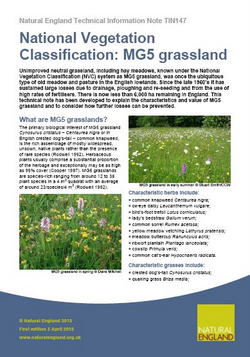 Unimproved neutral grassland, including hay meadows, known under the National Vegetation Classification (NVC) system as MG5 grassland, was once the ubiquitous type of old meadow and pasture in the English lowlands. Since the late 1960’s it has sustained large losses due to drainage, ploughing and re-seeding and from the use of high rates of fertilisers. There is now less than 6,000 ha remaining in England. This technical note has been developed to explain the characteristics and value of MG5 grassland and to consider how further losses can be prevented.