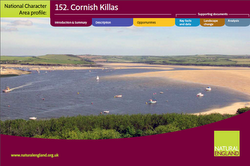 The Cornish Killas National Character Area (NCA) forms the main body of the Cornish landmass around the granite outcrops of Bodmin Moor, Hensbarrow, Carnmenellis, West Penwith and The Lizard NCAs. The northern half of the NCA, with its open character and general lack of tree cover, affords long views across Cornwall to neighbouring NCAs and out to sea. The gently rolling scenery, sheltered coves, headlands and estuaries of the south coast contrast with the exposed high cliffs and more rugged nature of the north coast. The rocky coastline is characterised by coves and headlands and possesses an impressive number of important geological exposures. On the eastern side of the NCA, the River Tamar separates the counties of Devon and Cornwall, with the Tamar Valley landscape linking the two NCAs of the Cornish Killas and South Devon. On the northern boundary of the NCA, the landscape merges with the western edge of The Culm, which lies in north Cornwall and Devon and shares many characteristics.
Further information