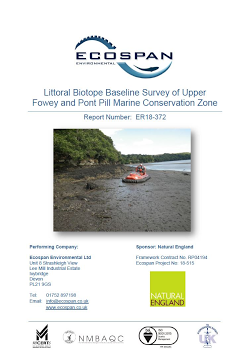 Natural England commissioned baseline surveys in order to monitor and assess the extent and condition of the designated littoral habitats within Upper Fowey and Pont Pill MCZ. Phase I surveys of the littoral rock and sediment habitats were undertaken by Ecospan Environmental Ltd in July 2018. Phase Il surveys of the littoral rock communities were also carried out later that month. For the purposes of Water Framework Directive Assessment, the Environment Agency undertook quantitative sampling of the littoral sediments within the MCZ over two days in May and September 2018. The data was then used to inform this study.

The Upper Fowey and Pont Pill MCZ was identified by the Finding Sanctuary MCZ project1. This estuarine site is located on the south Cornwall coast and protects a total area of 2 km2, making it one of the smallest MCZs in the UK. The MCZ consists of two spatially separate areas (Figure 1). The boundaries of the larger of the two areas include the upper tidal reaches of the Fowey estuary extending to Lostwithiel and including the estuarine River Lerryn, Penpoll Creek and Bodmin Pill. The smaller area comprises Pont Pill, a tributary estuary flowing into the Fowey on the Eastern side near Polruan.

The Upper Fowey and Pont Pill MCZ is representative of estuarine habitats found across southwest England. The site encompasses a range of littoral sediment types including mud, sand, muddy-sand, coarse sediment and sheltered muddy gravels, as well as saltmarsh and saline reedbeds. Littoral, low energy estuarine rock fringes the upper shore throughout most of the estuary, and extends to the lower shore where tidal currents scour the sediments away. The habitats and species within the site are considered to make it an important contribution to the Marine Protected Areas (MPA) network.