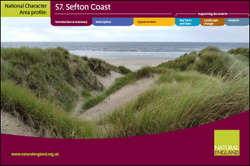 The Sefton Coast National Character Area (NCA) runs from the mouth of the Ribble Estuary in the north to the edge of Crosby in the south. It is characterised by intertidal sand flats and mudflats, coastal sand dunes, coastal dune heathland and conifer plantations, and is backed by farmland. It contains a series of coastal settlements that include Southport, Ainsdale, Formby and Hightown.
The sedimentary shoreline experiences a range of physical environments influenced by shallow water and high tidal ranges. This has led to the development of extensive sandy and muddy/sandy beaches along the coast. Dunes of recent wind-blown sand present the dominant landscape feature along much of the coast, rising locally to 20 m above sea level in the areas around Ainsdale and Formby. There are pine plantations on the dunes at Formby and Ainsdale.
Large areas of the coastline and estuaries are internationally designated for their conservation importance as wildlife habitats. The Sefton Coast Special Area of Conservation is internationally important for the sand dune complexes with all types of dune habitats. The Ribble and Alt Estuaries Ramsar site and Special Protection Area are internationally important for a wide range of birds and other wetland species. There are populations of many internationally, nationally and regionally important species including natterjack toad, sand lizard and red squirrel. Further information