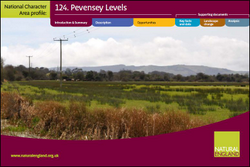 The term ‘Pevensey Levels’ refers to the low-lying area between Eastbourne and Bexhill in East Sussex. It is a wetland of national and international conservation importance and 37 per cent of the National Character Area (NCA) is a Site of Special Scientific Interest and Ramsar site. The Levels are predominantly rural and mostly grazed pasture, and consist of extensive drainage networks and flood plain. The NCA also includes the urban centre of Eastbourne which is a busy seaside town with a population of nearly 100,0004 and up to 5 million visitors each year. A coastline of shingle beach stretches along the length of the area, punctuated by settlements, historic military buildings and sea defence structures.
The area is framed by the steep scarp of the South Downs in the west and the higher ground of the High Weald in the north, with views of the English Channel to the south. Much of the Pevensey Levels was under water until the medieval period and the whole area is low lying and vulnerable to the effects of climate change, particularly coastal flooding. Sea defences consist mainly of open beach managed by periodic shingle replenishments, maintenance of groynes, recycling of material around the beach and re-profiling during and after storms. In the long term, these measures may need reviewing as sea levels rise. Managing the environmentally important Pevensey Levels is dependent on careful and continuous water management through a system of sluices and pumps.
Further information