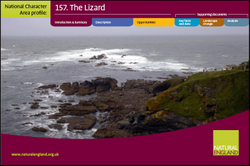 The Lizard peninsula forms the southern-most point of mainland Britain. The area is dominated by a gently undulating exposed heathland plateau cut by narrow river valleys. The surrounding coastline is rugged and geologically complex with caves, enclosed bays and small rocky islands. To the north flows the Helford River which in the summer carries a ferry linking the north and south banks at Helford Passage. There are long uninterrupted views over the plateau, out to sea and along the coast. These factors lead to a strong sense of place and sense of tranquillity.