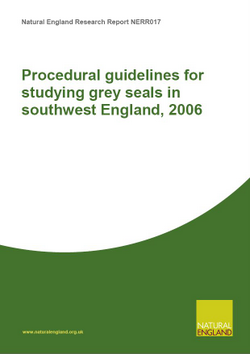 The work presented in this report is based on and developed out of sixteen years fieldwork studying grey seals in southwest England (here describing the Isles of Scilly, Cornwall, Devonshire and Lundy) between 1990 and 2006. It provides methods and procedures for monitoring seals and the sites they use that will generate datasets that will help to inform how targets could be set for their management.

The seal attributes that need to be measured are as given in the JNCC Common Standards Monitoring Guidance. These include trends in annual pup production, trends in abundance and distribution, levels of disturbance and other unintentional impacts on both seals and the sites they use. It is likely that in the future, photo-identification will be used to collect life history data and to help understand seal movements around sea areas and between sites.

Introduced, described, assessed and presented here as the basis for future monitoring of grey seals in southwest England are the techniques tested at North Wales sites between 2001 and 2005 and at southwest England sites between 1991 and 2000, 2006 and 2007. This includes recommendations about how to store the data in site-based and (individual) seal-based catalogues. The guidelines describe how to collect the several types of seal and seal site data that will be required to inform discussions and decision-making by coastal managers in ways that are repeatable and comparable between sites and over long periods of time.