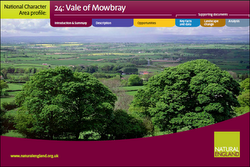 The Vale of Mowbray lies immediately to the north of the Vale of York, occupying the undulating flood plains associated with the rivers Swale, Wiske and Cod Beck. It is framed by the uplands of the Pennines to the west and the North York Moors to the east. The whole National Character Area overlies the Sherwood Sandstone aquifer, the second largest aquifer in England and a major drinking water supply. The orientation of the Vale and its position between the Pennines and North York Moors, have made it a significant transport and communications route between north and south. The route of the A1 today is largely the same as that of the Roman Dere Street, along which Roman settlement and military activity were concentrated. Today the only sizeable towns are the county town of Northallerton and Thirsk, both historic market towns.
Further information