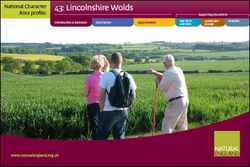 The Lincolnshire Wolds National Character Area (NCA) is a long, narrow band of rolling agricultural land dominated by a west-facing chalk escarpment approximately 50 m high. The area is characterised by a range of varied yet unified features including open, arable plateau hill tops, chalk escarpments, deep dry valleys with sinuous beech woods and isolated ash trees punctuating the skyline. The area is sparsely settled with many villages hidden within the folds of the landscape and modest country houses and farmsteads.
The landscape of the Wolds is strongly influenced by the underlying geology and the later glacial action that reshaped it. The solid geology is largely made up of a sequence of sandstones, clays, sandy limestones, ironstones and chalk deposited between 155 and 95 million years ago during the late Jurassic and Cretaceous periods. The chalk is capped in places by glacial deposits, while glacial meltwater channels have carved away parts of the Wolds to leave steep valleys. To the south-east, the overlying glacial till creates a rounded edge to the Wolds, and towards the southern end the chalk cap has been removed to reveal the Lower Cretaceous sands, clays and ironstones which form a series of low hills with gravel terraces. A variety of local materials, some of which are used as building material, are found across the area including sandy limestone, sandstone, ironstone and chalk, with striking red chalk being notable.
Further information