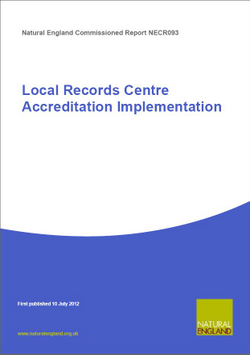 Local Records Centres play a vital role in supporting biodiversity conservation delivery in the UK. In spite of over thirty years of development their service delivery is highly variable across the country and the lack of a clear identity and recognised standard has held back their performance.

Recognising these issues, Natural England, working in collaboration with the Association of Local Records Centres (ALERC) commissioned the development of an Accreditation System early in 2010. This followed an attempt a decade earlier that was not carried through to fruition.

Natural England administers the Defra Fund for Local Biodiversity Recording, an initiative that was set up in September 2008 with an overall aim to develop the national network of local biological recording, increasing the geographic scope, quantity and quality of biological information available to the general public and key public sector users through the National Biodiversity Network (NBN) Gateway.

With wide engagement from LRCs themselves and local and national partners, a draft Accreditation System was developed by August 2010. The system comprised criteria at standard and advanced levels, and an outline process by which LRCs could self-assess and work through a period of months leading to an application for accreditation, for decision by ALERC.

The purpose of this follow-up piece of work was to trial the accreditation system with one or more LRCs and to produce guidance to assist record centres with meeting the accreditation criteria and a proposal for its implementation.