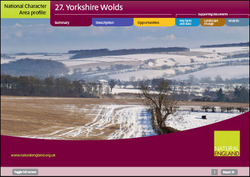 The Yorkshire Wolds National Character Area (NCA) form an arc of high, gently rolling ground extending from the Humber Estuary west of Hull, to the North Sea coast at Flamborough Head, north of Bridlington. They comprise a prominent chalk escarpment and foothills rising from the Vale of York to the west and the Vale of Pickering to the north, and falling to the plain of Holderness to the east. A very low proportion of the area is urban and woodland, and the vast majority of the land is agricultural. Woodland planting is restricted to small, scattered woodland blocks on higher land and steeper slopes.
Further information