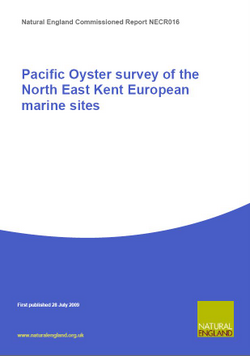 Pacific oysters are native to south east Asia and Japan. In 1965 the Ministry of Agriculture, Fisheries and Food introduced them from Canada to their fisheries laboratory at Conwy to find an alternative species to supplement the shellfish industry following the decline of the native oyster.

The trials confirmed the hardiness and fast growth of Pacific oysters in UK waters and commercial hatcheries and cultivation sites were established around the UK.

Pacific oysters were not considered capable of proliferation in northern Europe as water temperatures in excess of 20°C are necessary for reproduction. However, rising sea temperature, warmer summers and milder winters may be factors contributing to the spread of the species and in 1994, wild populations of Pacific oyster were recorded in Devon and further populations were found in Essex and Kent.

Pacific oysters are regarded as invasive in Holland, where they have been recorded since the nineteen seventies. They form extensive biological reefs and in some places have covered common mussel beds.

In March 2007, Kent Wildlife Trust conducted a Shoresearch at Ramsgate’s Western Undercliff to record inter-tidal species and their abundance. During this event, Pacific oysters were seen at levels not previously recorded.

This raised concern about their possible impact on the features of the North East Kent European marine sites (NEKEMS) and, as a result, this research project was commissioned to establish a baseline record of inter-tidal distribution and density.

The findings in this report will be used by Natural England and the North East Kent Scientific Coastal Advisory Group to inform future population monitoring and the future management of NEKEMSs.