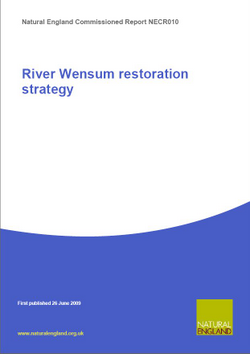 The River Wensum rises near South Raynham in Norfolk and flows east through Norwich, joining the Yare on the south-east side of the city. Upstream of Norwich, 71 km has been notified as a Site of Special Scientific Interest (SSSI), and it is one of 16 rivers in England designated as a European Special Area of Conservation (SAC).

A survey in 2002 showed that the ecological condition of the river had declined, and the principal reasons for unfavourable condition were water quality and siltation. The siltation problem is exacerbated by structures which impede the river’s hydrological functioning.

The water quality is being addressed, but the physical character of the river channel also needs to be restored to secure good ecological and hydrological functioning.

In 2004, a geomorphological appraisal of the River Wensum was carried out by Geodata Services, University of Southampton. JBA Consulting used these results to prepare this technical report and restoration strategy.

This is the first ‘whole river’ restoration strategy to be prepared in the UK. After consultation with key stakeholders, it has been agreed by the partners and is starting to be implemented.

Natural England is using the findings in this report to: