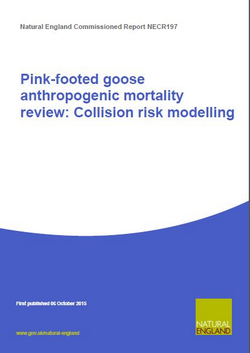 The aim of this work is to establish what the risk of cumulative effects of land/sea development activities is on the UK population of over-wintering pink-footed geese Anser brachyrhynchus and the results will be used to provide more consistence and transparent advice on avoidance rates for advisers and developers. This is the second in a series of three reports:

This report provides an analysis of British pink-footed goose demographic data and outputs from a population model developed using these data. The model was used to investigate the potential effects of additional mortality on the British population. In addition, the model has been used at the level of individual Special Protection Area populations to provide predictions of the potential effect of additional mortality on these sub-populations.