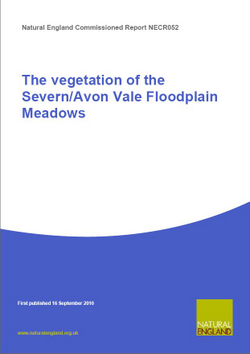 The National Vegetation Classification (NVC) identifies and describes different types of plant communities in Britain. It is a working tool that provides a framework to support land management, conservation and monitoring. Vegetation systems are complex and the classification cannot be comprehensive. However, as more data and information becomes available it can be refined and developed.

The grassland community known as MG4 grassland is found on seasonally flooded land that has traditionally been cut for hay. With improvements to grassland productivity and to river drainage this community is now very restricted.

Many of the Site of Special Scientific Interest (SSSI) grasslands within the Severn & Avon Vale have been notified for their species-rich MG4 communities. However, when assessed against the common standards monitoring devised by the Joint Nature Conservation Committee (JNCC) for this grassland type several of the sites consistently underperform.

The objectives of this study were:

The report identified four forms of MG4 as being present in the Severn/Avon Vale as well as a range of related floodplain vegetation types. Conservation objectives for SSSIs with notified MG4 interest in the Severn & Avon Vales will be revised to reflect these local varieties and the findings are being published in order to contribute to the ongoing re-assessment of the vegetation of floodplain grasslands including MG4 grassland.