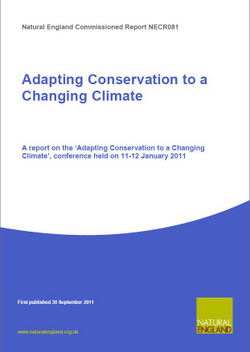 This report presents the outcomes of the ‘Adapting Conservation to a Changing Climate’ conference. A conference jointly sponsored and organised by Natural England and the British Ecological Society and held at Charles Darwin House, London, 11-12 January 2011.

Climate change is widely regarded as the major long-term threat to biodiversity and ecosystem services and it is essential that conservation adapts to deal with this threat. General principles have been identified and adaptation is starting to happen, but we need to step up the pace.

Effective adaptation requires a strong partnership between researchers, practitioners and policy makers. It is essential that adaptation measures are developed on the basis of sound science, combined with a rigorous assessment of their feasibility and acceptability to society.