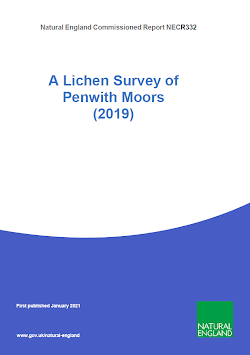 Ten sites with granite tors within West Penwith, Cornwall were visited in 2019 to determine the extent and quality of the Non-montane Acid Rock Assemblage of lichens, previously identified as a potentially significant lichen feature of the area. This was to collect evidence supporting designation of a Site of Special Scientific Interest (SSSI). Sites were assessed individually and collectively by the Threatened, Near-Threatened and Notable species of the Assemblage. Thirteen species belonging to the Assemblage were found, including Parmelinopsis horrescens (Near Threatened), Sarcogyne clavus (Near Threatened) and Usnea subscabrosa (Vulnerable). Individual sites scored from 4 to 15, with only one failing to achieve the threshold of 6 for consideration for SSSI status. All sites together scored 18, well above the threshold. Melaspilea interjecta was recorded new to England. Four additional notable species were recorded, which do not belong to the Non-montane Acid Rock Assemblage, including Rinodina ericina recorded new to England, and the second record for Great Britain.