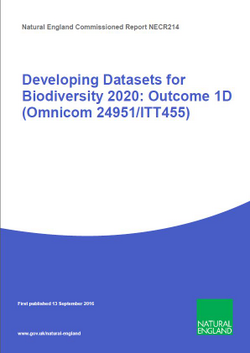 Degradation makes ecosystems more vulnerable to climate change. In some cases, such as deforestation and erosion of peatlands, it releases carbon dioxide to the atmosphere contributing to greenhouse gas emissions. There is increasing recognition that restoring degraded ecosystems is an important element of climate change adaptation and mitigation.

This report has been produced to inform outcome 1D of the Biodiversity 2020 strategy, which is : Restoring at least 15% of degraded ecosystems as a contribution to climate change mitigation and adaptation but is also expected to contribute to outcome 1B More, bigger and less fragmented areas for wildlife, with no net loss of priority habitat and an increase in the overall extent of priority habitats by at least 200,000 ha.

It investigates the complex issues surrounding degraded ecosystems across the whole of England and is intended to set the baseline of how outcome 1D should be approached and measured. The delivery of outcome 1D as a new target will develop between now until 2020 as our understanding increases around ecosystems and the impacts of climate change on them. The ambition is to deliver ecosystem restoration that will reduce impacts on our natural environment and society through making both more resilient to the changes ahead.