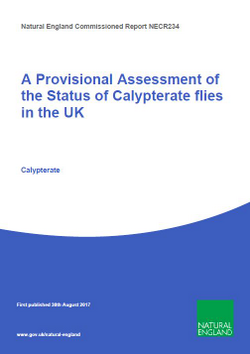 This report is one of a new set dealing with the status of the lesser known and less well-recorded invertebrates in the UK. The series aims to draw together and share what is known about such species, very much with a view to spurring on further interest in and recording of them. These volumes are complimentary to the Species Status Review Series which, by its very nature, covers groups with robust data sets, amenable to scrutiny through the lens of the IUCN threat categories, and with a more comprehensive understanding of both distribution and ecology. It is hoped that in drawing together the available information on the status of their species, the new assessments will encourage greater consideration of the species needs both by those charged with their conservation and with those engaged in recording their distribution and numbers. The bulk of the text for this volume is now somewhat historic (2005-2012), although has had some minor re-evaluation and text updates until April 2017. Readers should therefore be aware of this when using this work