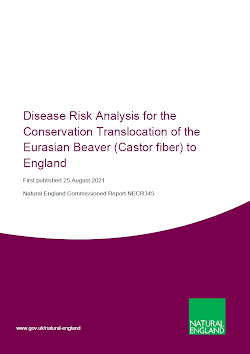 This report was commissioned to inform Natural England’s advice to government on the reintroduction of beavers in England.

Beaver reintroduction is a topic of increasing interest in England. Although species reintroductions are a key conservation tool used to help restore species populations and/or ecosystem function, species translocations can facilitate the movement of parasites and risk animals encountering parasites that they normally would not be exposed to. Risks from disease associated with wildlife translocations arise because individual translocated specimens are a ‘biological package’, consisting of the host and all the associated viruses, bacteria, fungi and other parasites that the animal or plant may naturally harbour. Reintroduced beavers may, therefore, act as a mechanism for the introduction of new or previously eradicated parasites or may establish new transmission routes for the infection of humans, domesticated livestock and existing wildlife.

Disease risk analysis is a qualitative risk assessment method undertaken in the planning stage of a conservation intervention such as a reintroduction. During a disease risk analysis, the risk that infectious and non-infectious hazards will precipitate during or following an intervention is analysed in the absence of mitigating measures. Subsequent mitigating measures are proposed to reduce this risk. Preventing the introduction of alien parasites to native populations is crucial because parasite invasions have the potential to cause catastrophic mortality outbreaks in potentially immunologically naïve populations.

Disease risk analysis and the evaluation of mitigation measures is, therefore, a key step in understanding and controlling any disease risks for humans, livestock and wildlife that may arise from a reintroduction or translocation of wildlife.

This report provides an update to existing disease risk analyses for beavers in Britain and investigates the translocation pathways specifically relevant to reintroductions in England.