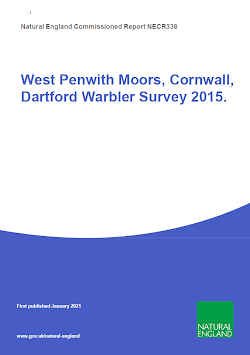 A survey of 13 sites on the West Penwith Moors was carried out in 2015 to assess Dartford warbler populations against criterion 3.2 Localities used by aggregations of breeding species Chapter 17, Birds in the Guidelines for the Selection of Biological SSSIs (JNCC 2015). A total of 72 observations of Probable or Confirmed behaviours in line with British Trust for Ornithology (BTO) breeding evidence codes were recorded over 39 site visits (3 per site). Analysis and mapping of these observations demonstrates there were 55 probable breeding pairs or territories in 2015.

A survey of the same sites carried out in 2014 (Curtis et al: West Penwith Moors, Cornwall – Breeding Bird Survey 2014, Natural England) recorded an estimated 55 breeding pairs of Dartford warbler despite this survey not being specifically targeted at Dartford warbler populations.

The 1% threshold set out in Criterion 3.2 is 32 pairs (national total is estimated to be 3,200 pairs). The West Penwith sites have significantly exceeded this on two consecutive breeding seasons. Consequently it is recommended that any notification as SSSI should include the Dartford warbler population as a “feature of interest”.