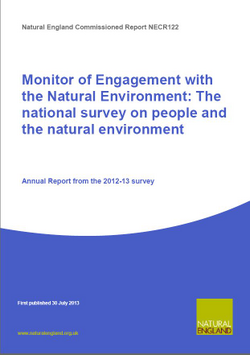 In 2009 Natural England, Defra and the Forestry Commission commissioned TNS to undertake the Monitor of Engagement with the Natural Environment (MENE) survey.

In the four years since MENE was commissioned a wealth of information has been collected regarding visits taken to the natural environment and related behaviours and attitudes.
This annual report presents the headline findings for the fourth year of fieldwork from March 2012 to February 2013.

A number of further reports including the year one, two and three annual reports and the results of additional analyses of the MENE data are available from the Natural England website.